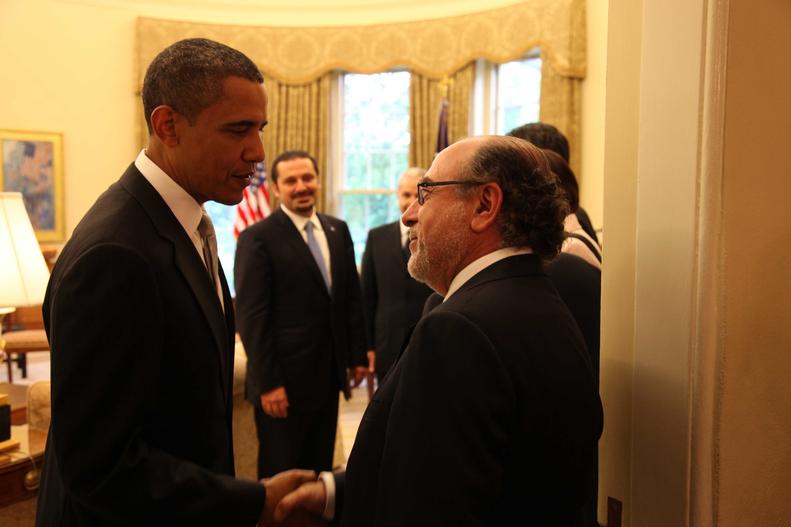 ​Released 27 December 2015, on the second anniversary of Mohamad Chatah's assassination.


The American ideals that most of us hope will one day be universal - of democracy and freedom, of the right to liberty and pursuit of dreams and aspirations - are firm values I hold dearly thanks to my father, Mohamad Chatah. He applied those same values to Lebanon, and he carried those beliefs with him until his assassination on 27 December 2013.

My father sustained those principles throughout his political career: he was a democrat among intolerants, and a freethinker among conformists. His determination that Lebanon could not fully recover from its civil war past without confronting the issue of arms outside of the state’s apparatus was not only a rational and decent standpoint, but one that stood on par with any healthy democracy’s functionality. He paid the ultimate price for that view when his political-criminal foes struck him down in a car bombing in downtown Beirut.

Mr. President, it is remarkable that you have worked tirelessly to resolve the Israeli-Palestinian conflict, a tragedy that has contributed much to the Middle East’s political malignancy and has fueled regional hatred not just against Israel, but also against America for its perceived bias in support of Israel. And it is equally commendable that you have reached out to your Iranian adversaries in finding a peaceful resolution to that country’s nuclear ambition, a global security threat that deserves its share of dialogue and tough negotiation. But it is hard to see any strategic benefit in engaging Iran beyond those nuclear talks. It is especially worrisome that your administration praises that regime for its regional conduct in confronting extremism.

Iran, for all its persuasions on Lake Geneva and Vienna, and perhaps even the White House today, remains the primary source of instability in the Middle East. And its Revolutionary Guards are not friendly to United States interests in the region. Terrorist outfits like al Qaeda and ISIS that have shocked the world over with their heinous crimes and gore - whether in Beirut, Paris or San Bernardino - do pose a serious strategic threat to many players in the Middle East, including the United States. But that does not mean their regional foes, be they Hezbollah, Bashar al Assad of Syria, or Ayotallah Khamenei and Qassem Soleimani of Iran, should be beneficiaries of recent nuclear agreements. Those actors share the primary burden for the currently miserable state of affairs in the Middle East.

Rapprochement with Tehran is a mistake.

Shortly before my father’s assassination, he was working on a letter to Iran’s President Rouhani, in draft form when my family released it. My father, encouraged by your administration's reach-out to Rouhani, also believed Iran's newly elected president to be a leader the Lebanese could turn to, hoping for a new page in Iranian-Lebanese affairs. My father's missive spoke of the desire for sovereignty and mutual respect, where Iran would change course and reign in Hezbollah’s weapons, and help Lebanon achieve the sensible goal of peace and stability. My father’s preferred weapons of choice were his regular TV interviews, a blog, a twitter feed, and the occasional Facebook post. His opponents, fearful of that potential change in policy and too cowardly to engage his thoughts, murdered him in broad daylight.

I refuse to accept the reversal of fate, that their swords are mightier than his pen.

Mr. President, by engaging Iran beyond the nuclear portfolio and retreating from their newfound influence in the region, you have diminished the value of American idealism. I believe it makes my father's work, along with his colleagues who died during the last decade in the same fashion and those still alive risking their lives to challenge violence and state subversion, seem all but a waste. My father paid the ultimate price for freedom and democracy in Lebanon, and you are applauding his murderers in the name of fighting Sunni extremists, in reality killing off the moderates of that part of the world.

My father lost his life attempting to reach out to Rouhani, advocating a shift away from subjugation over Lebanese sovereignty. And here I am, reaching out to you, asking that you halt ill-conceived bargaining that benefits Iran’s proxies in Lebanon. I know that as an American citizen now away from Lebanon, I worry less of henchmen chasing me down for expressing my views this way. Nevertheless I fear for the survival of any political decency in Lebanon and the region, and I cannot imagine leaving my father’s legacy behind, only to have it undone with your rapprochement with Iran.

I will sleep better at night knowing I spoke my truth. I ask you to champion the democrats that believe in America's values, not the regime that seeks to destroy them.